China is the first country to use metal currency, and among the metal currency, copper coin was the main currency in the past dynasties. In the Yin and Zhou dynasties, China used tooth shell as currency, but because there were not enough real shells, they replaced them with imitation copper shells, which were the transition form to metal currency.

China's copper coin was born in 1889, which is the beginning of the title "mechanism currency" in the history of Chinese currency. The copper coin, without a hole in the middle, was made by imitating the Hong Kong copper coins. Therefore, the appearance of the coin is different from that of the previous dynasties. The birth of the copper coin marks that China's metal currency casting technology has entered a new stage of advanced mechanized production from the traditional manual foundry.

On December 29, 1910, after the revolution of 1911, representatives of 17 provinces who had been restored elected Sun Yat Sen as the provisional president of the Republic of China in Nanjing. On January 3, 1912, the government of the Republic of China was founded, and the Qing Dynasty was destroyed. The feudal autocracy which lasted for more than 2000 years in China ended.

After the founding of the Republic of China, copper coins continued to be widely used. In 1914, the copper yuan was officially renamed "copper coin". The biggest difference between the copper coin issued by the Republic of China and that of the Qing Dynasty was that the dragon pattern was replaced by the Jiahe pattern composed of rice ears, which was only a very short period in the long history of Chinese currency. 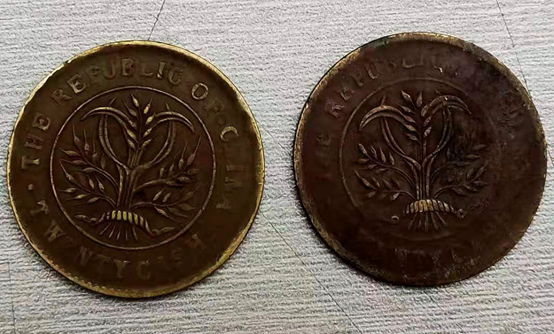 This double banner coin made in Hunan Province, copper yuan in the Republic of China, is a modern currency made by machine with unique design. On the front of the coin, there are five colored flags and 18 Star iron and blood banners. On the outside of the circle, the four characters "made in Hunan Province" are inscribed on the upper ring, and the lower ring is "20 Wen when making money".

On the back of the coin, the English words "twinty cash" and "the repeatable of China" are inscribed on the outside of the circle, and the inner ring is engraved with the grain of Jiahe rice with luxuriant branches and leaves, implying that the country pays attention to agriculture and the people's life, and the picture is extremely harmonious. The overall color of this coin is ancient and heavy, the writing style is smooth, the ornaments are exquisite, the edges and teeth are clear, the arrangement is regular, and the depth is moderate.

The Double Flag coin not only has the significance of commemorating the establishment of the Republic of China, but also is used as the currency in circulation. This copper coin has a very high collection and investment value. It has witnessed the deposition of its historical time. It is not difficult to see its obvious historical transitional characteristics. The copper coin has gone through many vicissitudes and has an indescribable collection and investment value.

The Double Flag coins issued by the Republic of China, as one of the most famous copper coins in China, are the reflection of the political, economic, cultural and artistic conditions in the period of the Republic of China. Therefore, its value has been found by more and more people, and more and more people have collected it. The development of high price double flag coins in auctions is amazing. It is understood that the overall market trend of the Double Flag currency is on the rise, and the prospect is extremely considerable and bright.