[collection introduction]: Tian Huangshi is a famous rare seal cutting stone produced in Shoushan village, Shoushan Township, Fujian Province, China. Together with other stones produced in Shoushan, it is collectively referred to as "Shoushan Stone". Tian Huangshi is one of the best varieties of Shoushan stone. Because of its scarce output, it is precious. It was favored by the emperor in the Qing Dynasty. It has long been said that "Yi Jin is three times" and enjoys the reputation of "stone emperor"!   As early as more than a thousand years ago, people in China began to collect Tian Huangshi. Tian Huangshi was even more famous in the Ming and Qing Dynasties. Many dignitaries and scholars competed to collect Tian Huangshi. It is said that in the early Qing Dynasty, the emperor offered sacrifices to heaven and earth, and there was no lack of a top-grade Tian Huangshi in the God case 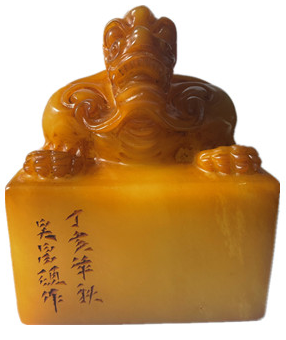 Tianhuang is warm and greasy, ranking first among soft carved stones. In the Ming and Qing Dynasties, it was presented to the imperial palace as a tribute and carved into imperial seals and artistic ornaments. Therefore, Tian Huangshi was respected as "the king of stones" and "the emperor of stones", so its value was unparalleled. From the attribute of Tian Huangshi, all carved works of art can be treated as cultural relics, because it cannot be copied and belongs to works of art without regeneration. 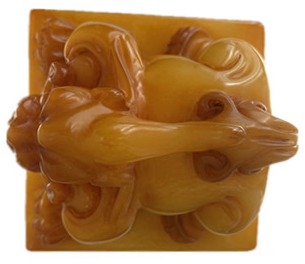 Tianhuang stone ground is fine and moist, with many radish patterns. Its shape is oval and its edges and corners are not obvious. You can't see the bleeding of color lines, and feel it with your hand. The surface is often wrapped with a thin layer of yellow or black stone skin. Through the stone skin, its internal texture is warm and delicate. Under the strong light, it can be seen that there are dense but not disorderly silk screen like fine textures in the radish, namely "radish pattern". Its texture is like red tendons. Its color is different in depth and shade. According to the hue, it can be divided into golden yellow, loquat yellow, orange peel yellow, chicken oil yellow, cooked chestnut yellow, tung oil yellow, etc. The best color of tianhuangshi is golden yellow, orange yellow and loquat yellow. Yellowstone has a golden luster. The translucent or more transparent Tian Huangshi, called Tian Huang jelly, is the best of Tian Huangshi. 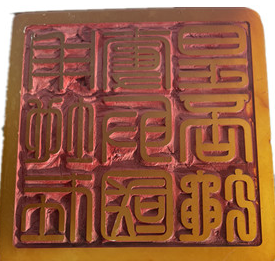 Today, the company is lucky to collect a Qingshou mountain Tian Huang Rui animal seal, which is made of Tian Huangshi, the "king of stones". The texture of Tian stone is clear, the stone is moist and greasy, the radish grain is clear and dense, the color is bright yellow, the curd is like jade, moist and transparent. The sabre and pen are clean and handsome. The auspicious beast carved is strong and powerful. It wants to come out. India is elegant, healthy, fluent, powerful and exquisite. It is a rare treasure of Tianhuang. It is extremely rare and precious. It has high collection value and appreciation value.